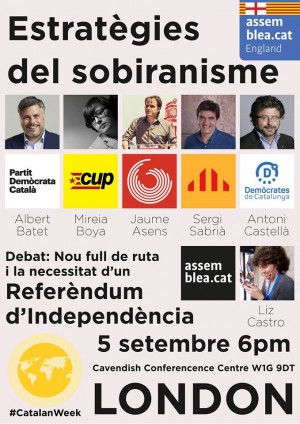 Yesterday we had the pleasure to have the Catalan National Assembly (ANC) at the Cavendish Conference Centre. ANC is a grassroots association responsible for the massive pro independence demonstrations on Catalonia’s National day in the last few years.

Yesterday’s event brought to Cavendish Conference Centre a panel of representatives from all the Catalan parliamentary parties backing the demand for an independence referendum and was chaired by the lovely Liz Castro, a California-born author of boundless energy who coordinates ANC’s International Committee.

The audience, and those following the event live stream online, had a chance to submit questions to the panellists and I thought the questions from the public were excellent and to the point showing that audience interaction can contribute a lot to this type of event.

London’s #catalanweek is part of World Catalan Week an initiative taking place this week in seven cities (Paris, London, Zurich, Rotterdam, New York, Madrid and Bilbao) to raise awareness of the current political situation in Catalonia in the run up to Catalonia’s National Day on Sunday. It will also include film screenings, live music and events like traditional human tower demonstrations to promote Catalan culture.

All in all, quite an impressive display of what can be achieved by truly commited volunteers! 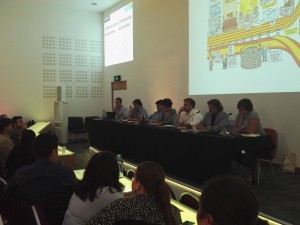