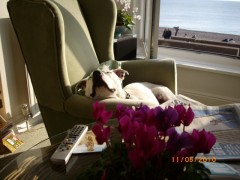 It’s nice here, but Gill tells me I’m not as well behaved as I could be.   I really don’t see why.   Just because I attacked her collie friend, Sophie,  the other day.   After that, Sophie’s mum said Sophie would have to go home.   I was quite happy, but Gill said poor Sophie doesn’t get out much and would have enjoyed the walk.

This morning, we were walking along by the Harbour when I spotted a medium sized dog of mixed  breed.    Well, I couldn’t resist –  I ambushed her and rolled her over.      Gill said she would have liked to say to the owners “Oh,  Bobby never normally behaves like that” but she felt she couldn’t in all honesty keep saying this any more.

Walking home, we saw a greyhound and an alsation approaching.    We took evasive action.     I pretended to be quite relaxed, but just as we  got parallel to them, I suddenly lurched out at them and gave everyone a very nasty shock.      Gill says I always look extremely pleased with myself after I’ve had one of my skirmishes, and look up at her as if it’s a great joke.      She says she is surprised at my behaviour in view of my great advantages in life, and that I need therapy, but sadly even the expert dog behaviourists have said that I’m a hopeless case.      Gill says  fighting is  one of my only faults.   The way I look at it, if it’s one of  my only faults I should make the most of it.

Gill says we are polar opposites.  She prefers dogs to people, and I  prefer people to dogs.     I think she is right on this one.

On the plus side, I was a very good office assistant yesterday.   Gill was working hard.   But I did my part.     I feel I was a very soothing influence on her, snoozing gently on my  back with my legs in the air.   And I ensure that her time-keeping is good and that she takes regular statutory breaks for my toast and walks.

I have to sleep on the sofa at night, as Steve says I’m not allowed on the bed.   Gill says she wouldn’t mind, but that sometimes it’s a good thing to let Steve have his own way.   I’m quite happy on the sofa,  and just go in to check on them several times a night to make sure they are OK.    I think they like that.

Today Steve gave me a large bowl of  fish soup he made.   Yum!   Gill told him I was supposed to be on a diet but Steve said soup wouldn’t count.  He says he has more for me tomorrow too.