The year has flown by and last week we were joined by a fabulous panel of judges in London who decided the winners for the 2017 awards.

The following blog has been taken from the original here: http://www.animalheroawards.co.uk/blog/item/139-it-s-judgement-day

We met at the prestigious Cavendish Venues at Asia House where children’s author and McFly legend Tom Fletcher told us that he was ‘Extremely honoured to be here’ adding ‘last year was amazing, it’s incredibly important to honour the great work that both people and animals are doing’. A keen philanthropist, Tom supports the WWF-UK and has participated in campaigns for the RSPCA. 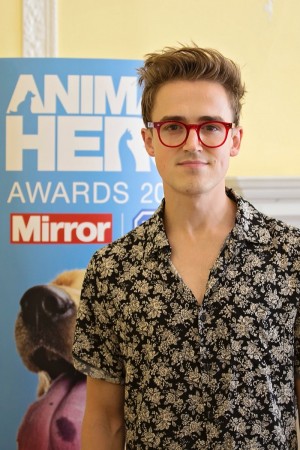 Peter Egan (officially one of our most favourite people in the world) also joined us and his passionate voice for the animals brought us all to tears several times, in particular when he described his terrible visit to a dog meat farm earlier in the year. Peter is the UK Ambassador for Animals Asia, patron of All Dogs Matter – a dog rescue and rehoming charity, and a Vice President for the RSPCA and The League Against Cruel Sports. 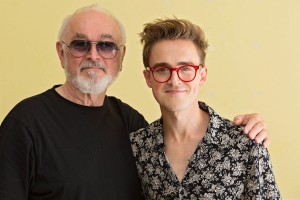 Last year’s Caring Animal of the Year winner Haatchi (and his PA Colleen!) came back this year as judges. Haatchi is an Anatolian shepherd dog who was rescued after being beaten and left for dead on a railway track in East London. He was hit by a train, and had to have his rear left leg and tail amputated. But when he met his new owners son Owen their bond was unbreakable. Owen Howkins is one of only 25 people in the world to suffer from Schwartz-Jampel Syndrome, which makes his muscles permanently tense and prevents his bones from growing. He struggles to breathe, and after starting school became increasingly withdrawn and was unable to play with other children in the playground. But with Haatchi by his side, his life changed for the better. 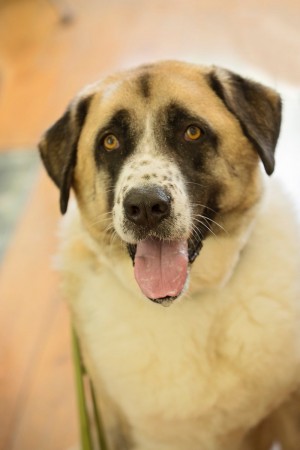 TV favourite Laura Whitmore was also on the judging panel this year with her little dog Mick who had great fun moving along each judges lap for a cuddle! Laura works with animal charities such as PETA, is a Goodwill Ambassador for UNICEF, supports Plan International Ireland (Because I am Girl Campaign) and The Prince’s Trust. 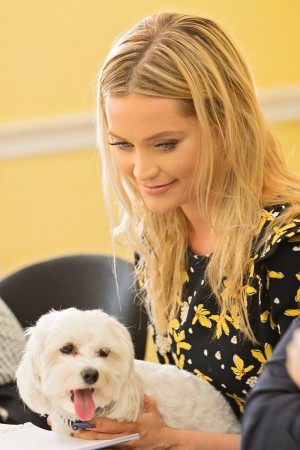 If you’re looking for a voice of authority then look no further than Angela Rippon who has been a familiar face and voice in British broadcasting for over 50 years. Angela was awarded a CBE in the New Year’s Honours list 2017 for her contribution to charity work in the field of Alzheimer’s and dementia. She remains committed to a number of charities including the British Red Cross of which she is Vice President, and Support Dogs for which she is Honorary President.

It’s always good to get a perspective from our emergency services and Natalie Shaw was the perfect fit to join our judging panel. Natalie first joined the police at 22 years old, working with the mounted branch in 2000 before being posted to Great Scotland Yard as a constable. To date she has served as a constable, sergeant and inspector within the branch. 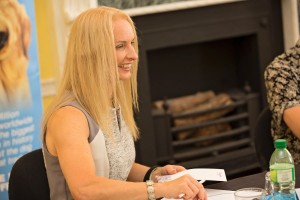 Natalie has owned horses and dogs throughout her life and is aware that animals have their own character and personalities including courage and intelligence. Working with operational animals allows Natalie to see this on a daily basis.

Another voice that we are also keen to hear from is our partner the RSPCA who we love teaming up with for these important awards. Joining us on the panel once again this year is Dr James Yeates – Chief Veterinary Officer of the RSPCA, an RCVS Registered Specialist in Animal Welfare Science, Ethics and Law and a Fellow of the Royal College of Veterinary Surgeons.

Unfortunately award winning journalist and broadcaster Nicky Campbell was unable to join us because of work commitments but all of his nominations were put forward to the panel. Nicky is special ambassador for Adoption UK and supports animal conservation issues working with Born Free and the David Sheldrick Wildlife Trust, and campaigns against the ivory trade.

We started the judging with our Back From the Brink category which looks at an animal who has battled back to health after suffering injuries or neglect that were so serious that they might not have survived. Obviously this was a very difficult category to judge, every animal who has reach this final stage has an amazing story to tell. We heard about a whole range of animals from dogs to horses, rabbits to bears and quite simply they were all inspirational and their survival is due to their strength and the love of the people who saved them.

Our Services To Wildlife Award was up next, which is presented to an individual or group who has had an impact on the preservation and welfare of wildlife in Britain. Again each of the finalists are incredible but a decision was finally made that the judges all agreed upon.

Caring Animal of the Year was next on the agenda and the dogs spent a very long time discussing the merits or every finalist. Peter Egan was very passionate about one entry, saying ‘This is a particularly touching story to me. It relates to the adult who is struggling which holds great resonance’. Lloyd struggled to get the panel to reach a majority decision, saying ‘Wow, this is really, really tough’’. Eventually a winner was chosen but it was agreed that all of the finalists are incredible. 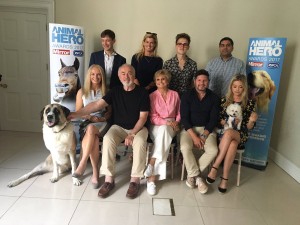 Conservationist of the Year was an interesting category this year as it covers such a wide range of people working to conserve animals anywhere in the world. Again opinions were divided with Angela Rippon putting her nomination down or the person that she felt ‘was doing something that no-one else is, something that makes a real difference’. Peter added ‘I feel passionate that we as human beings have lost contact with our relationship with certain animals’. Laura felt that she had a personal connection with one of the animals nominated, she said ‘They would be my choice, being with them changed my perception’. Tom wanted to give the award to the person who ‘also trains others to do the same, which is wonderful’. In the end it came down to two favourites and the judges had to bite the bullet and whittle it down to one , which was no mean feat.

Up next was our Young Animal Hero – this is always a fiercely fought category and this year was no exception. Lloyd started off the discussions on the winner by saying ‘This one is going to be horrendously hard’. In fact in the end it was so hard that two winners were chosen with Peter describing the relationship between one child and animal as ‘quite magical’.

Inspirational Animal of the Year was next on the list which is for an animal who has inspired people with their spirit or courage. The judges were in agreement on who should be the winner with Angela describing the animal as having ‘courage, initiative and intelligence’.

Onto Hero Animal of the Year – for an animal that has shown outstanding courage in a time of crisis. This was another unanimous winner with Colleen describing the story as ‘touching her heart’.

The RSPCA Superstar of the Year category was up next, which is always difficult as everyone nominated makes a vital difference to the welfare of animals across the country on a daily basis. They are all winners but one slightly had the edge this year and as Tom quite rightly said ‘Now’s the time to really recognise the hard work that they have done’.

The Next Generation Award was next which championed a young person who has been inspired to help preserve the future of the rich and varied species on our planet, or an adult who has inspired the next generation. From the onset Peter told us ‘There is a huge need in the UK to introduce the importance of our relationship to wild animals and get it on the curriculum’. He is, of course, completely right and our winner will be a very popular choice for this award.

Our penultimate award is for Animal Rescue which is awarded to an individual or group who have used their initiative or risked their own safety to rescue an animal or animals from danger. The finalists in this category were incredible and Peter brought us to tears talking about several of his recent missions to help animals in danger around the world. The winner was an unanimous decision and their story will break your heart.

Last but by no means least is our Public Service Animal of the Year Award which goes to an animal who works in extreme conditions to protect and serve. Again the finalists were incredible and we had to choose two winners as we couldn’t split them, each was amazing in their own field of expertise. 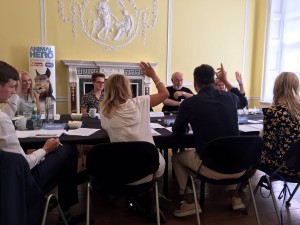 We wrapped up proceedings with a group photo, tiny Mick tried to take on huge Haatchi but was swept into Laura’s arms (before Haatchi even noticed) and we all went away happy in the knowledge that we have some incredible winners and our 2017 awards are going to be something very special.

At Cavendish Venues, we’re extremely proud to host such a wonderful Awards panel especially given the number of pets we have across our team as huge animal-lovers. 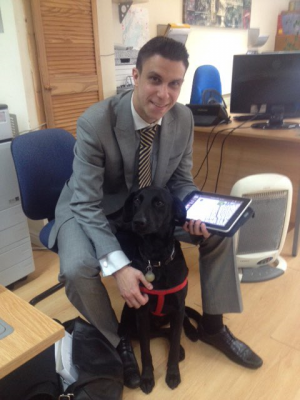 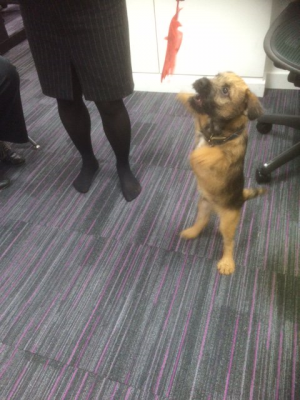 We look forward to joining and celebrating the Animal Hero Awards 2017 in September 2017 in London.

In line with government guidance we are open for small meetings in a Covid secure way. Click on the banner to find out more.