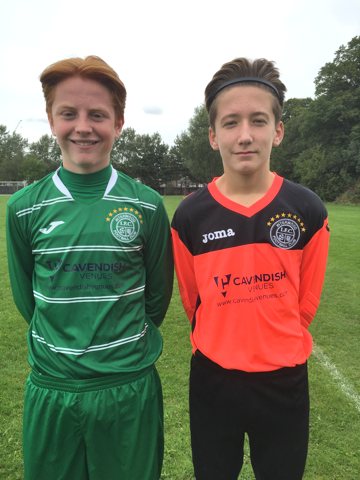 Cavendish Venues are delighted to announce our sponsorship of Interwood FC Under 15’s team for the 2015/2016 season.

Interwood FC is a well established Chartered Standard club situated in North East London and run by Ex Pros Trevor and Danny Bailey. The Under 15’s team are competing in the Echo Premier Division for 2015 2016 season – the league drawing teams predominately from North and East London and the West Essex areas.

We would like to wish them success for the coming season and will keep you posted – Good luck lads, from one successful team to another!

And they’ve started as they mean to go on..

Looking very smart in their new branded tracksuits and home kit, Interwood started the League season at home in E17 and came out 6 – 3 winners.

Despite starting the match brightly and having the vast majority of possession – with the opposition having 10 men – the match was even at 3 goals a piece at half-time with Interwood failing to finish multiple chances and conceding goals after being twice caught on the break plus from a set piece.

After the break however – again with most of the possession and despite missing a penalty – Interwood FC upped their game and scored 3 well worked team goals to win 6 – 3 and take the 3 points.

Keep it up lads!