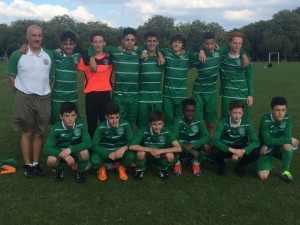 After getting off to a winning start in their first League home match Interwood made it 7 from 7 on Sunday in a 9-0 encounter.

Not all of Interwood matches however have been as seemingly one sided as the last.

After the seasons opening win of 6-3 the second game was a very tight affair as Interwood struggled – on a lovely day in Victoria Park E3 – against a very tight defence. One well-taken goal and a score from a free kick however were enough to see them win 2-1. In the third game Interwood were better and some good passing football produced a 6-1 home win. The fourth game was likely, as it proved, to be close with Interwood coming out eventual 3-2 winners. The Interwood stopper was likely man of the match and kept the team in the game at times.

In the fifth League game on a windswept Walthamstow marsh, Interwood started slowly with the game even at 2-2 at half time. The team improved however after the break and were eventual 4-2 winners. The sixth match was the strangest. Against a strong team, Interwood won 9-4 but would be disappointed at conceding two late goals to admittedly the opposition’s best player. The fact Interwood scored 9 however – and with multiple players converting – shows a strength in the team.

With a first clean sheet in the seventh match and having scored some first rate individual and team goals, the team is in confident mood!! Complacency however is not an option – so keep it up!

The team break from the League to start their London Cup campaign this coming weekend and all at Cavendish Venues wish them luck!