About Sports, Coronavirus and Some Interesting Wimbledon Facts…

The end of an era… The last nail in the coffin… Curtain closed!

Events industry, especially sporting events have suffered another major blow, a punch in the face from Covid 19… Wimbledon is CANCELLED!

It may sound a bit more dramatic than it should, but given the situation, I feel the level of drama is just about right!

Thanks Coronavirus! And yes, I know, being selfish here, this is a virus that is wiping out everything in it’s way – people, businesses, economy. Please don’t get me wrong, I do understand the seriousness of the situation and the safety and wellbeing of all people will ALWAYS come first! #stayhomesavelives

But, since our regular lives have come to a stop, as a massive sports fan, I feel like we still have the right to moan and vent a little! So here it goes…

Back in the day, when we used to get up and go to work (remember the good old days?) I’m sure most of us enjoyed watching some sports. Some of my colleagues at Cavendish conference venues would get very passionate about Rugby (I won’t say who, but they are Irish and wear glasses 😊) and others would be more of football, cricket, golf or tennis fans and personally I am more of a basketball and Formula 1 girl! We’d all meet in the conference office after a big game or other event and have a quick recap, when it all went downhill…

The first bad sign was when postponements of several Olympics qualifiers started, then it was racing followed by golf, football, rugby, basketball, cricket and many others. We then started hearing news of Coronavirus positive tests in sportsmen across the globe! NBA players, Formula 1 drivers, footballers, rugby players etc. and at this point we all knew this was the end of all sporting events for a while, but we still had our hopes for Olympics, Paralympics and Wimbledon… Sadly not for very long! With the news of Olympics and Paralympics being rescheduled to 2021, the last of my summer hopes – Wimbledon has also shut the door in our faces… Sorry Rachel, I know you were lucky enough to get tickets every year!

So in light of the sad news, we’d like to share some fun and interesting facts about Wimbledon, the oldest tennis tournament in the world with the first competition held back in 1877. With a rich history, there are plenty of interesting statistics and facts concerning the tournament: 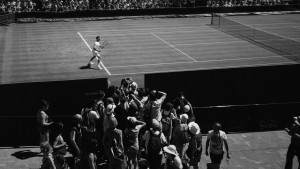 Thanks for reading and letting me vent! Hope you found the facts interesting and now back to business, those meeting rooms, training spaces and workshop rooms are feeling very lonely and empty now, so lets get cracking!