Home›News›Just a bit of history… @ Hallam

Just a bit of history… @ Hallam

Some interesting history about our Hallam Conference Centre @ 44 Hallam Street… 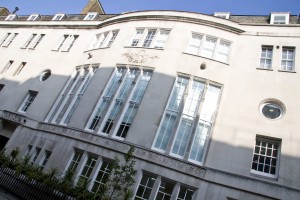 The southern part of this building (to the right in the picture above) was erected in 1915 to house the General Medical Council (formally the General Council of Medical Education & Registration of the United Kingdom). The Council had begun to investigate a move to larger premises from its offices at 299 Oxford Street in 1903, during the presidency of Sir William Turner. he northern part of the building, always intended, was not added until 1922–3. The Dentists Act of 1921, seen through by the Liberal politician Francis Dyke Acland, had established the Dental Board of the United Kingdom to take on the GMC’s oversight of dentists and to deal with the scourge of unqualified dentistry. To maintain good communications with the Council, the new Board, chaired by Acland, built the interconnected premises next door. 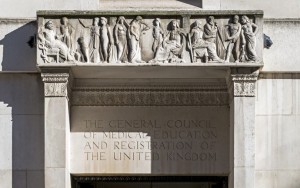 The architect at both stages was Eustace C. Frere, of South African origins and Beaux-Arts trained, and the builders Chinchen & Co., of Kensal Green. Robert Angell had prepared plans in 1914, but Frere was preferred, probably because of family connections. The building is distinctive in Hallam Street for its clean Portland stone elevation – Frere was able to steer the Council away from a cheaper brick alternative by saving money in other areas. It is more widely unusual for its synthesis of neo-Georgian form and proportion with Neo-Grec ornament. Above the original entrance in what was at first an otherwise symmetrical front elevation, a once fine but now weather-worn lintel bas-relief by Frederick Lessore follows the suggestions of Dr Richard Caton, a member of the council, in depicting the cult of Asklepios (seated, left) and his extended family whose members represent aspects of medicine. This ‘frieze’ has a Greek-fret continuation across a full-height bow bearing more relief sculpture by Lessore and his assistants. Diminutive caryatids grace the tops of mullions, symbolising the Council’s functions, and the bowl of Hygieia is at the centre of the bow between the upper storeys where a council room was placed under a dining room. These spaces were laid out between separate staircases for members and the public and in front of committee rooms. The extension has similar external detailing, its tall windows lighting a board room. 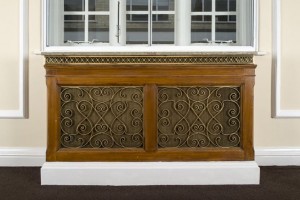 This Grade ll listed building is situated in the West End, adjacent to the BBC and the Langham hotel. This Conference Centre is a haven of tranquillity and excellence having been the recipient of numerous customer service standard awards. The double height Council Chamber boasts a capacity of up to 135 people in cabaret style seating whilst up to 250 people in theatre style can be accommodated in a sound proofed, daylight strewn room with audio and visual equipment suitable for international events. There is an array of different sized rooms at the Hallam perfect for small or large meetings and events and with a superbly experienced management team in place there is something to suit every meeting need. 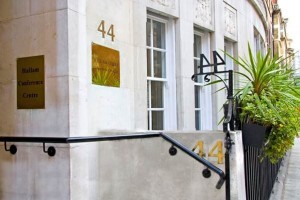