The craving, the dish and Mariam’s poor husband

One of the hardest things during this crisis for me has been trying to get my food fix. Specifically, I have been craving Asian food. I’ve been daydreaming about the Sushi place I loved to go to, the Chinese restaurants I visited frequently and the warm taste of some Vietnamese Pho.

Before this lock down started, I used to go nearly every month to one of my favorite Korean restaurants in Soho, to have a 2 hour long Korean Hot Pot session. Sadly, going to get some Korean food seems to be a thing of the past right now. Unfortunately, there is no Korean take away where I live and my Korean food craving seems to have been increasing!  I decided, like so many other people have done so during this lock down, let’s try and cook some new food!

What a great idea right? Trying to expand my cooking abilities and increase the variety of dishes I can make. In short, it was a BAD idea!

My first attempt of Korean food was making a Korean sticky BBQ Tofu dish. From the images I think it looked rather good! My husband tends to be my personal Guinea pig and was the first one to try the dish. Looking at him I realized something must be wrong! I decided to taste the Tofu dish and very quickly realised it was way too salty! We really do not like wasting food but sadly it just wasn’t edible. However, my spicy minced lamb and my vegetarian Pak Choi dish where a hit! 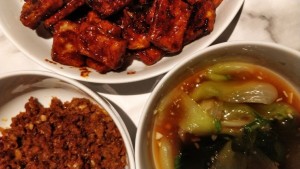 Few weeks later my sister in law sends me an image of the Korean dish she tried making with glass noodles, meat and veg! It looked great! Of course, I asked for the recipe and with her instructions I felt confident enough to try and make Korean food again!

My second attempt was a glass noodle dish, with peppers, spinach, fried tofu (by the way I love Tofu) and sesame seeds, so far so good. As I was making the sauce, I kept trying it to make sure it was not salty (the bases of the sauce were similar to the one I used for the first dish).  The recipe required a bit of sugar, so remembering my first attempt I decided to add a bit more sugar. Sadly, disaster struck! Instead of adding sugar with a spoon, I thought I would just sprinkle some straight from the jar…. Well, my grip on the Jar slipped and I could just see all this sugar pouring in, way more than intended!

I tried to rescue the food by adding a bit more soy sauce. After what I thought would be enough, I decided to plate the dish… fingers crossed! 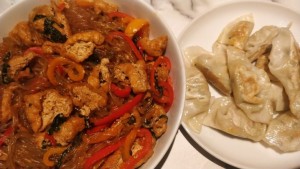 My lovely Husband was first to try the dish, I saw his face again (bless him he does try to hide it). I knew straight away something was not right. I tasted the food and this time it was so sweet it could have been a dessert! Attempt number two failed!

After this second disaster I have reached the conclusion not to waste any more food and just wait for this crisis to be over so I can go out and get some decent Korean food! I secretly think my poor husband would agree with my decision.